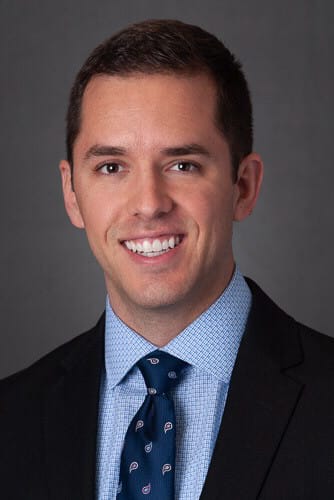 Dr. Robert Wetzel, D.D.S. grew up in the foothills of Colorado and developed a passion for dentistry at an early age. He graduated with an undergraduate degree from Colorado State University in 2009 and went on to earn a Doctorate of Dental Surgery in 2015 at the clinically-renowned Creighton University School of Dentistry in Omaha, NE. There he was elected class president all four years and received the Dr. and Mrs. Philip J. Maschka Award for Ethics in Dentistry. This award is presented to the graduating senior who has displayed the highest order of professionalism, concern for patients, honesty, integrity, morality, responsibility, and scholastic & clinical ability.

Due to his academic success in school, Dr. Wetzel was awarded the Health Professions Scholarship by the United States Air Force. Upon graduation, Dr. Wetzel joined the Air Force as an active duty Captain and had the privilege and honor of serving his country for over four years as a general dentist. During his service, he completed an Advanced Education in General Dentistry Residency at Joint Base Langley Eustis, Virginia, where he was awarded Top Resident and was subsequently stationed for three years at MacDill AFB, Florida. There he gained advanced training in the areas of Prosthodontics and Endodontics working alongside specialists on a daily basis, as well as being awarded the Squadron’s Company Grade Officer of the Year for excellent service to his patients and support of the AF mission. Dr. Wetzel moved to his wife’s home state of Wisconsin in 2019 to practice in Northern Wisconsin before settling with his family in Green Bay.

In order to give his patients the highest quality of treatment, he regularly attends continuing education courses with the Spear Institute, a world-recognized dental education center in the areas of cosmetics, occlusion, and full mouth rehabilitation. Dr. Wetzel is a member of the Brown-Door-Kewaunee Dental Society and Wisconsin Dental Association (WDA). He also stays involved in his field by serving on the WDA Journal’s Editorial Advisory Board.

Dr. Wetzel is married to his wonderful wife, Alexandra. They enjoy traveling around Wisconsin and spending time outside. In his free time, Dr. Wetzel enjoys spending time with his wife and kids, DIY projects, CrossFit, cooking, snow skiing, cycling, and becoming a Green Bay Packer fan.

One of the reasons Oral Health Associates is the best family dentist in Green Bay is our diverse and highly-skilled professionals like Dr. Wetzel. On top of your annual dental cleanings and exams, our Green Bay family dentists team, including Dr. Wetzel, will be able to provide a range of dental treatments including:

Ready to Schedule an Appointment with Your Green Bay Family Dentist?

For more information on how Dr. Wetzel, D.D.S., and the rest of our dentists at Oral Health Associates can help you, contact us here on our website or call us at 920-437-3376. We look forward to hearing from you!